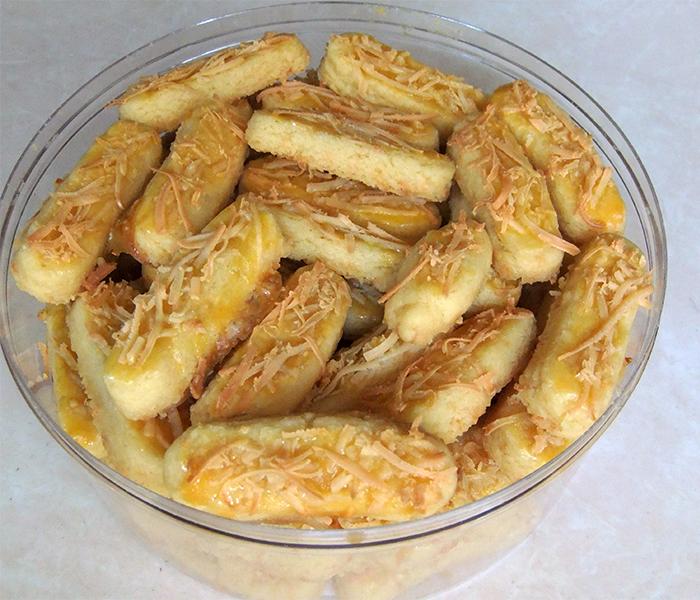 We can easily guess that cheese cookie, or what commonly known as kastengel, originated from the Netherlands. It is possible that the cheese cookie was introduced by the Dutch to Indonesia during the colonial era. The name kastengel comes from two Dutch words, ‘kaas’ – meaning cheese, and ‘tengels’ – meaning stick. The name itself clearly shows that the cheese is the main ingredient.

Unlike other cookies that mainly taste sweet, kastengel has a dominant salty flavor from the generous amount ofcheddar cheese used in the recipe. In our country, kastengel is inseparable from the other cookies, pineapple cookies (ananastaart or nastar), cheese sago cookies and snow white cookies. Kastengel is also always present during holidays such as Eid al Fitr, New Year, and Christmas.

It is also interesting to know that the kastengels we know today is actually a Dutch snack commonly known as hapjes. In its native country, Kastengels does not look like the ones we know today. The word ‘tengels’ also means finger, which describes the size of these cheese cookies.

In the Netherlands, the cheese cookies named kaastengels are also served in a form of finger-sized spring roll with gouda cheese or edam cheese filling. The cheese spring roll that is also named kastengel is fried and served with sweet chilli sauce. It may sound unusual to our ears, but there is no harm in trying it.

Kastengel basic dough is quite simple. Kastengel dough is a mix of butter or margarine, egg yolk, grated cheese that is matured so the texture is not soft, flour, cornstarch, and raising agents or yeast. The dough is rolled out and cut into rectangles measuring approximately 1 cm x 3 cm.

The rectangle shaped cookies are then baked on a greased cookie sheet in the oven preheated at 180 degrees Celsius. Before baking the cookie dough, don’t forget to brush the top with egg wash and sprinkle some grated cheese on top. Baking these cookies takes approximately 15 to 20 minutes.

It is best to avoid the use of young cheeses in the dough. Using young cheese may ruin the dough when baked. Young cheese such as mozzarella will melt when baked. When you use a large amount of this type of cheese for your the dough will make your cookies stick to one another. Use cheese which texture is stable or you can even use cheese spread in your recipe to get an even better taste.