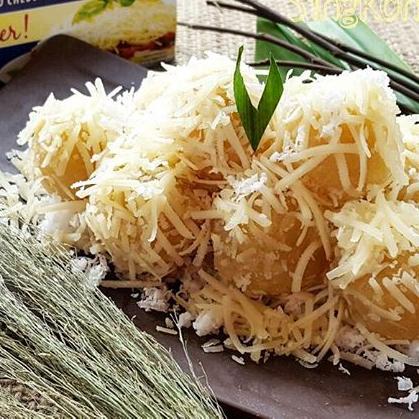 Cheese cassava is widely popular because of its savory taste and soft texture. However, most cheese cassava do not use cheese as part of the ingredients, except as topping. Many people also only sprinkle cheese flavoring on top of fried cassava. It does not necessarily mean that we cannot make cheese cassava with real cheese.

The ingredients and process to make cheese cassava is quite easy. The required ingredients are steamed cassava, garlic, pepper, nutmeg, and salt. We can also add three table spoons of cheese spread and two liters of fresh milk for one kilogram of cassava. Add seasonings such as chopped garlic, ground pepper, ground nutmeg, salt, and cheese spread into two liters of milk. Mix well and refrigerate the sauce.   Steam cassava for about an hour until soft. Good cheese cassava has a soft texture. Once the cassava is soft, dip the cassava into the seasoning and milk mixture that has been refrigerated. Let it soak for 30 minutes, then fry until crisp. Once the cassava is cooked and crisp, sprinkle with shredded mozzarela cheese while it’s hot. The mozzarella cheese sprinkled on top of hot cheese cassava will melt and makes it a very tempting snack.   The key to cook delicious cheese cassava is the sauce dip used for the steamed cassava. The dip used before frying cheese cassava must be cold. It is common to use seasoned iced water as a dip for cheese cassava. Cheese cassava dipped in iced water will unfurl and will be crisp once fried. You can certainly substitute the dip with milk and some cheese spread if you like.   It is said that good quality cassava has reddish skin. Cassava with reddish skin is said to have a smoother texture. To know the color of cassava skin, you have to peel the outer layer as they are sometimes still covered by soil.   Cassava is a snack that can be enjoyed by all walks of life. Cassava, tapioca, or yuca (manihot utilissima) is a woody shrub that thrives in tropical climate such as Indonesia, as well as in sub-tropical climate. Legend has it that the other name of cassava, i.e., ketela comes from the work “castilla” (pronounced “kastilya”), as it was first brought by the people from Portuguese and Castilla (Spain). Cassava root is a high-carb source of energy.   Choose fresh cassava and don’t eat them raw, because bad quality raw cassava is highly poisonous. Once harvested, cassava rots easily, even when refrigerated. Rotten cassava is marked with a dark blue color as the toxic cyanide acid begins to form. Peeling cassava will lower the cyanide content. Drying cassava in the sun and soaking them will also reduce the cyanide content.
Rate it!